The international video bridge was organized by the residents of Chukotka and Alaska, in memory of the heroic deed of the pilots of legendary ALSIB 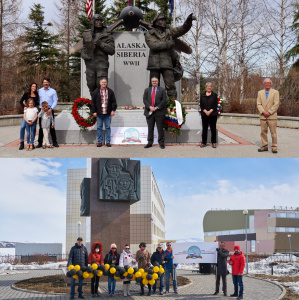 Residents of Chukotka and Alaska honored the memory of Russian and American pilots participating in the ferry of aircraft along the legendary ALSIB route.

At exactly 10 o’clock the residents of Anadyr, Egvekinot and Fairbanks laid flowers at the monuments symbolizing the heroic feat of aviators during the Great Patriotic War. The initiators of the video bridge were residents of Chukotka, who handed over to Alaska the wreaths laid today at the foot of the ALSIB pilots memorial in Fairbanks. The memorial ceremony was attended by Mayor of Fairbanks Jim Matherly and the son of ex-Senator from Alaska James Bingley with his family.

The head of the region in his congratulation noted that Victory Day will always be special for our country and expressed gratitude to veterans of the Great Patriotic War.

“Each Russian family has its own story, its own memory of the war. We will remember the feat of the heroes - Mikhail Budaev and Konstantin Eroshkin, who fired from a wrecked tank for several days, restraining the onslaught of the Nazis. Mikhail Vukvul the bone carver, who died during the defense of Leningrad. The famous five of the first Chukchi pilots. More than one and a half thousand inhabitants of the district fought on the fronts - they defended Moscow, fought near Stalingrad, liberated Ukraine, Belarus and reached Berlin. We will always remember how in the severe conditions of Chukotka, ALSIB airfields were built and operated, how Chukotka women sewed thousands of fur coats and mittens for the soldiers of the Red Army” - said Roman Kopin.

From 1942 to 1945, Fairbanks - Krasnoyarsk special air route - the first after crossing the border between the USSR and the USA passed through the territory of Chukotka. The route, which had several names: “ALSIB”, “Alaska-Siberia”, “Krasnoyarsk-Uelkal airway”, “Krasnoyarsk airway”, was built and operated to drive airplanes that the United States supplied to the USSR under a Lend-Lease agreement.

For the transfer of combat aircraft in the USSR, 16 airdromes were built and reconstructed, including 6 in Chukotka, as well as 15 in the USA and Canada. In peacetime, the construction of such a route would take at least 5 years, while in the war years it took several months to commission the main structures.