Sergey Nosov Presented Report On Work of Government in 2018 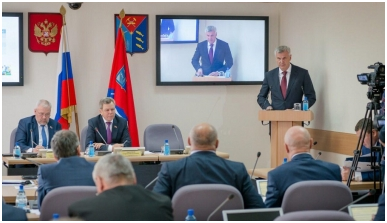 Within the framework of the XXXIII regional parliament meeting, the Governor of Magadan oblast Sergey Nosov made a report on the work of the Kolyma government.

The head of the region noted that last year there were difficulties both on a national and regional level.
The first topic was devoted to regional budget. The Governor said that revenues increased by 7%, but still did not cover all costs. Nosov stressed that since 2014 subsidies of regions has been reduced from 8 to 6 billion rubles. Consequently, lack of financial resources led to an increase in public debt and payables. With the participation of the President of the Russian Federation, the government managed to receive additional financial assistance in total amount of 7.139 billion rubles.

At the end of 2018, the region also financed a health insurance program in the amount of 1.7 billion rubles. With the support of the Ministry of Health of the Russian Federation and the Ministry of Finance of the Russian Federation, the government is currently working on development of the Kolyma health system modernization program as well as determination the source of funding.

The head of the territory described the current economic situation in the region as positive. Thus, such indicators as the gross regional product and industrial production index are annually increasing. The growth of tax revenues could be significantly higher, but it is constrained by federal benefits.

Sergei Nosov mentioned the inconsistent situation with the Kolyma roads. According to Russian Federal State Statistics Service, 70% of regional roads and 36% of local roads comply with standards. According to the Governor, such inaccurate assessments cut off the region federal funding. At the moment, efforts are being made to ensure accurate assessments in order to open funding for roads repair.

The situation is similar in the construction industry. No inventory of the housing stock has been carried out for 10 years. Thanks to the work of the regional government, it was possible to achieve a change in the methodology for assesment the standard. These problems were raised by the head of the region at federal level.

Sergey Nosov also paid particular attention to national projects implementation. Magadan oblast participates in 10 national projects and implements 43 regional projects.
Together with the Ministry of Agriculture of the Russian Federation, the region is developing a program for regional agricultural development.

Among the main tasks for 2019, Sergey Nosov noted a decrease in the number of negative factors affecting the region budget and the creation of positive dynamics in all areas