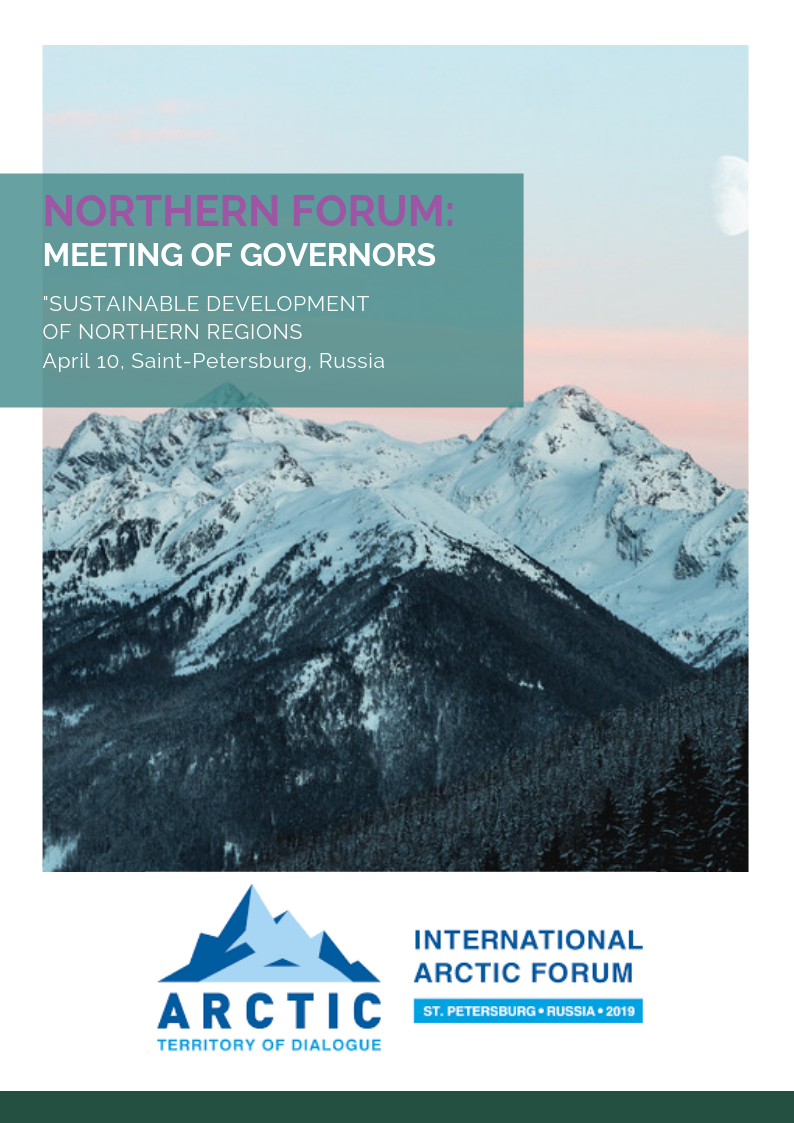 II Meeting of the Northern Forum’s Governors "Sustainable Development of the Northern Regions" will be held within the framework of the V International Arctic Forum "The Arctic: Territory of Dialogue"

The Northern Forum is an international organization which brings together regional governments in the circumpolar North. It is a platform for cooperation and exchange of experience and best practices in order to improve the quality of life and promote the sustainable development of cold regions. The Northern Forum was established in the early 1990s and became an important stakeholder which is strengthening and expanding non-political dialogue between governors of the Arctic and northern regions of different countries, heads of municipalities and organizations.

In 2013–2018 the Forum broadened its membership almost twofold and it currently has 14 member regions. The Forum also established relations with other Arctic-related companies and organizations, which allowed it to enlarge its business partnership and to set a foundation for future joint projects and collaborations. Currently the Northern Forum unites ten regions of the Russian Federation, Akureyri (Iceland), Alaska (USA), Gangwon (Republic of Korea), Lapland (Finland), and 12 business partners from Iceland, Norway, Russia, USA, Finland, France, Japan

The I meeting of the Governors within framework of the International Arctic Forum "The Arctic: Territory of Dialogue" was held in 2017, Arkhangelsk, Russia. The issues of integration of regions of the Arctic and the North, exchange of experience and best practices were discussed. During the discussion, problems of transportation, ecology were reviewed, and solutions to major economic problems and the development of productive forces in the Arctic were proposed. The conversation was about improving the quality of life of people, developing forms of support for indigenous peoples of the North, about new approaches to infrastructural development in the regions, about best practices in different countries of the world and regions of Russia.

Not only international partnership, but also interregional cooperation can make a difference in the Arctic. The Northern Forum is a large international nongovernmental organization that brings together Governors of the Northern regions; it has observer status in the Arctic Council and consultative status in the UN ECOSOC. The Northern Forum is a key platform for enhancing and broadening a non-political dialogue among Governors of the Arctic and Northern regions, leaders of municipalities and organizations.

The focal points for Northern Forum to become strong platform for the Arctic regions to operate are following:

-          Ministry of Economic Development of the Russian Federation

-          The Ministry of Foreign Affairs of the Russian Federation

-          Aisen Nikolaev, Head of the Sakha Republic, Vice-Chair of the Northern Forum

-          Aleksandr Pilyasov, Doctor of Geographic Sciences, Professor of Faculty of Geography, Moscow State University, Director of the Center of Northern and Arctic Economies at the Council for Research of Productive Forces, Chair of the Russian Section of European Regional Science Association, Vice-Chair of the Expert Council on Arctic and Antarctic under the Chairman of the Federation Council of the Federal Assembly of the Russian Federation

-          Lars Kullerud, President of the University of the Arctic

-          Lassi Heininen, Professor of Arctic Politics at the Faculty of Social Sciences, University of Lapland (Finland), Chair of the Steering Committee of the Northern Research Forum

APPROVAL OF THE NORTHERN FORUM STRATEGY 2030