Arctic development is being discussed in Saint Petersburg 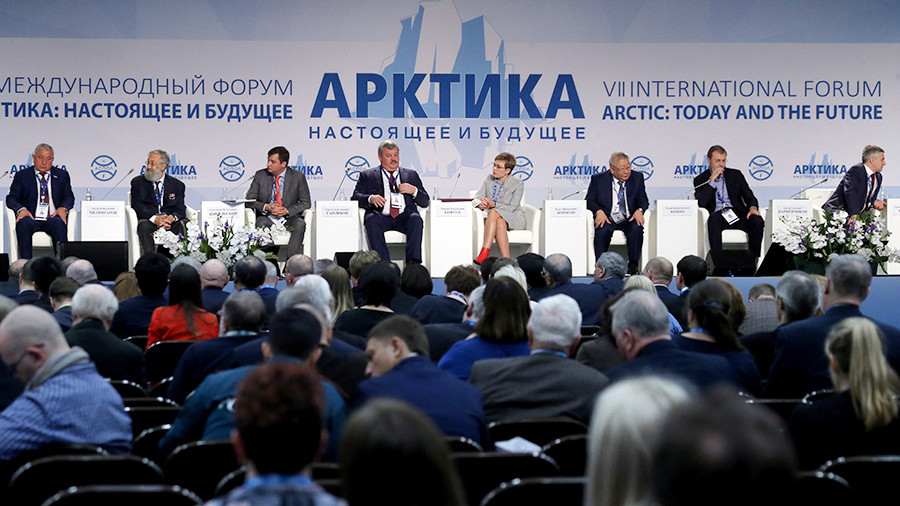 VII International Forum "Arctic: Today and the Future" started in Saint Petersburg on December 4. This year the Forum brought together over 1600 participants. Key issues on this year's agenda are a development of reference zones and monocities, industrial cooperation and modern communication systems, environmental preservation and development of ecotourism in the Arctic. The meeting of the State Commission for Arctic Development chaired by Deputy Prime Minister of Russia Dmitriy Rogozin will traditionally take place in the margins of the Forum.

The Forum was opened by a plenary session entitled "Reference Zones: Regional Models and the Role of the State". President of the Association of Polar Explorers, Special Representative of the President of Russia for International Cooperation in the Arctic and Antarctic Artur Chilingarov welcomed the participants of the Forum and noted that 2 plenary sessions, 30 panel sessions and working sessions will take place during the Forum. Participants of this plenary session discussed the readiness of the Arctic regions to launch and operate the reference zones, as well as coordination of the activities of federal and regional authorities in this process. The discussion was joined by Deputy Director of Regional Development Department, Russian Ministry of Economic Development, Dmitriy Verigin, Head of Sakha Republic (Yakutia) Egor Borisov, Governor of Chukotka Autonomous Okrug Roman Kopin, Acting Governor of Nenets Autonomous Okrug Aleksandr Tsybultskiy, Governor of Murmansk Oblast Marina Kovtun, Head of Komi Republic Sergey Gaplikov, Head of Karelia Republic Artur Parfenchikov, Member of Russian State Duma Viktor Zubarev, Deputy Governor of Yamalo-Nenets Autonomous Okrug Aleksandr Mazharov, Deputy Governor of Arkhangelsk Oblast for Strategic Development and Investment Policy Viktor Ikonnikov.

The parallel working and panel sessions discussed investments in the Arctic, construction in polar conditions, new projects and technologies for the development of solid minerals, ensuring affordable flights in the regions and other important issues.

The proposals and initiatives of Forum's participants will be included in a final public resolution that will be submitted to the Russian authorities to improve public governance, administration, and regulation in the Arctic region.

The Second day of the Forum will begin with the plenary session "Arctic Time: Social and Economic Development of the Polar Region", which is to be attended by Deputy Prime Minister of Russia Dmitriy Rogozin who will also lead the meeting of the State Commission for Arctic Development.

Program of the Forum