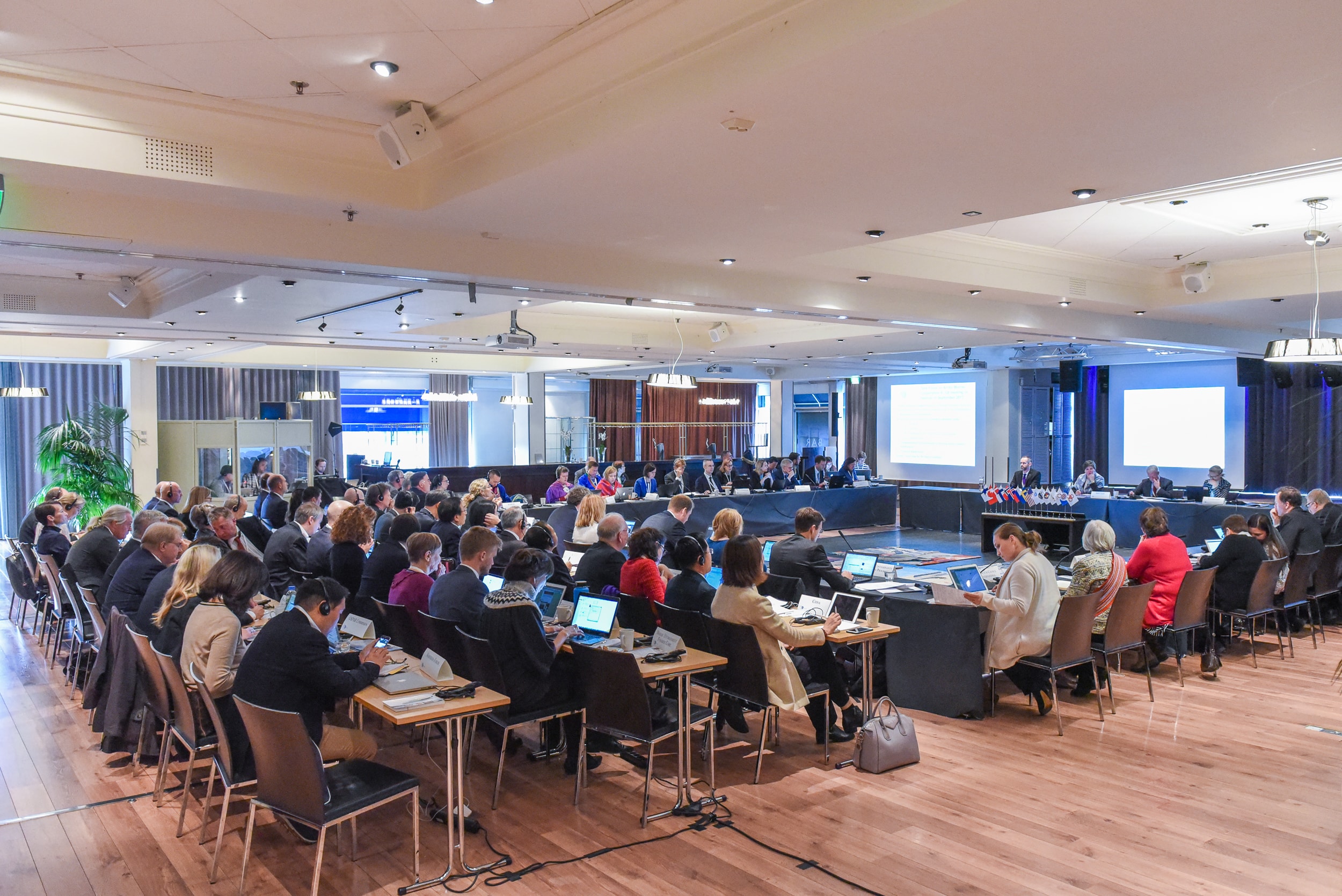 Arctic Council’s Senior Arctic Officials meeting held in Oulu, Finland, on 25-26 October 2017, was attended by representatives of the eight Arctic states and six indigenous Permanent Participant organizations, as well as the Arctic Council’s six Working Groups and more than thirty Observers. The Northern Forum was represented by the Governor of Lapland Mika Riipi and NF Executive Director, Mikhail Pogodaev.

This was the first Arctic Council’s Senior Arctic Officials’ meeting during the Chairmanship of Finland (2017-2019), as well as the first following the 10th Arctic Council Ministerial meeting, which took place in Fairbanks, Alaska, in May 2017.

The meeting opened with the announcement of the appointment of Nina Buvang Vaaja as the new director of the Arctic Council Secretariat. This decision was warmly welcomed by all delegations. Delegates then addressed overarching issues for the Arctic Council, such as pollution prevention, education, and the Council’s strategic focus for the years ahead. Much of the Council’s work in these areas is carried out by its six Working Groups — ACAP, AMAP, CAFF, EPPR, PAME, and SDWG — as well as its Task Forces and Expert Groups. 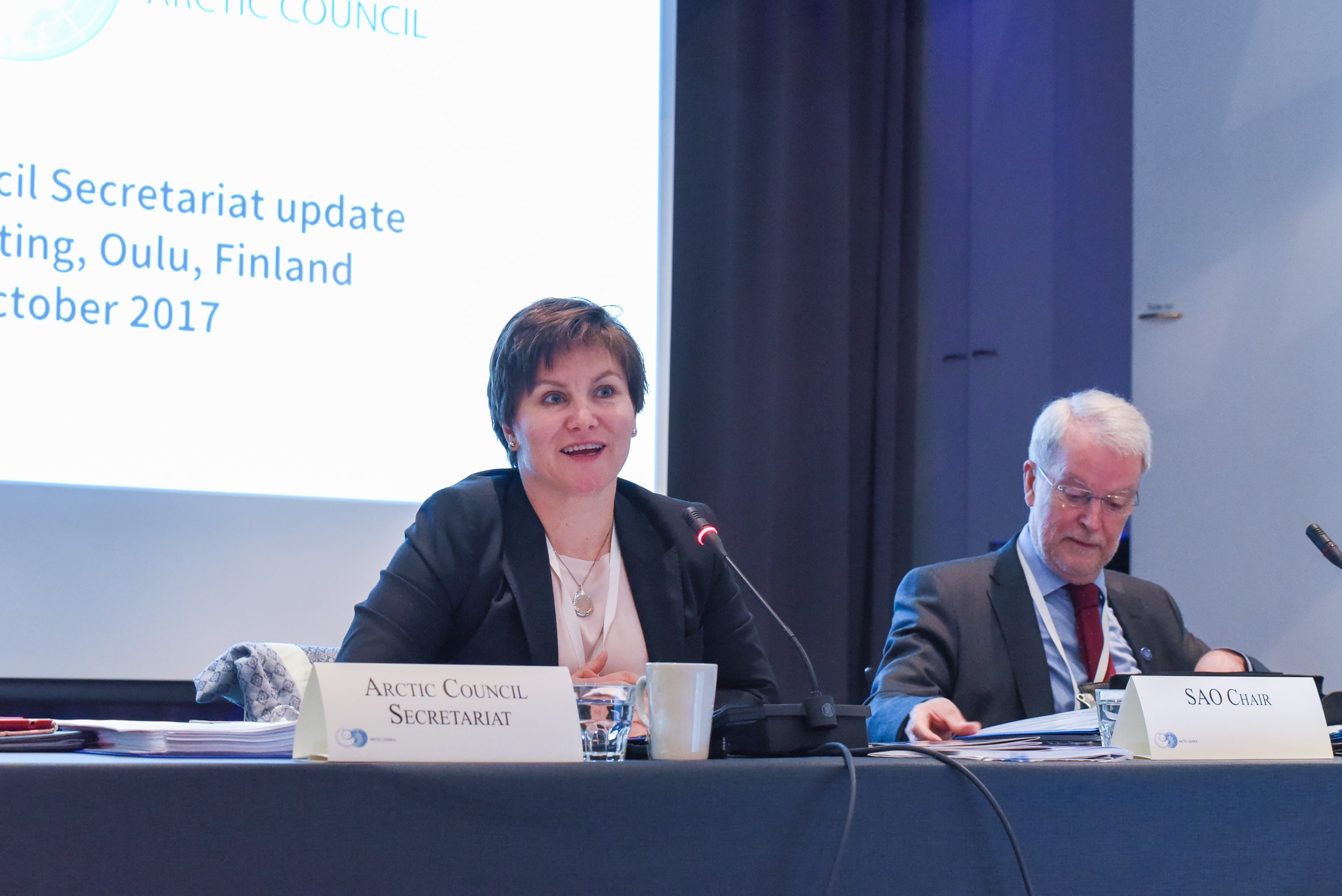 Nina Buvang Vaaja was announced as the Director of the ACS

In addition to these broad thematic discussions, the Council also received progress reports from the Working Groups and specific updates on:

• the Council’s plans for an official side event on Monday, November 6, during the upcoming UNFCCC COP23 taking place in Bonn, Germany;
• work by ACAP, AMAP, EPPR, PAME, and the Expert Group on Black Carbon and Methane that addresses pollution prevention;
• education-related work ongoing in SDWG and CAFF;
• plans for an Arctic Resilience Forum to take place in September 2018 in Rovaniemi, Finland; and
• the ratification of the 2017 scientific cooperation agreement, which is progressing quickly.

Also, the special session devoted to the current and potential future contributions of Arctic Council’s Observers’ in Arctic pollution prevention took place as part of Arctic Council’s Senior Arctic Officials meeting. The seven Observers, newly-admitted during Ministerial meeting of May 2017 held in Fairbanks, USA, were also invited to provide introductory remarks. Then all other Observers were given an opportunity to speak. The Northern Forum was represented by the Governor of Lapland Mika Riipi, who presented the Arctic pollution prevention efforts of the regional governments. Prior to the meeting, the NF Secretariat together with NF member-regions has prepared information for this special session. Despite a 4-minute speech time limit for Observers, the Governor Mika Riipi had a chance to deliver information about main achievements and challenges faced by regional governments on pollution prevention in the Arctic. Upon NF Secretariat’s request, the following regions have sent their proposals on this matter: Alaska, Akureyri, Khanty-Mansi Autonomous Okrug, Sakha Republic (Yakutia), Yamalo-Nenets Autonomous Okrug and Magadan Oblast. All these proposals were submitted to the Arctic Council also in writing.

Senior Arctic Officials’ meeting also discussed the further development of the UArctic and Arctic Economic Council and their contribution to these areas of work.

Another item broadly discussed by Senior Arctic Officials and Permanent Participants was the education. The discussion noted the experience of Russian regions (Sakha Republic (Yakutia) and Yamalo-Nenets Autonomous Okrug) in a development of the Nomadic Schools System and an implementation of the project “Arctic Children: Preschool Education”. In addition, the representative of the Russian Association of Indigenous Peoples of the North, Siberia and Far East of the Russian Federation (RAIPON) Vladimir Klimov spoke about a joint initiative of Sakha Republic (Yakutia) in preparing to the Congress of Teachers of Native Languages, Literature and Culture of Indigenous Peoples of the North, Siberia and Far East Russia, which will be held on November 21-22, 2017 in St. Petersburg within the premises of Herzen State Pedagogical University of Russia. 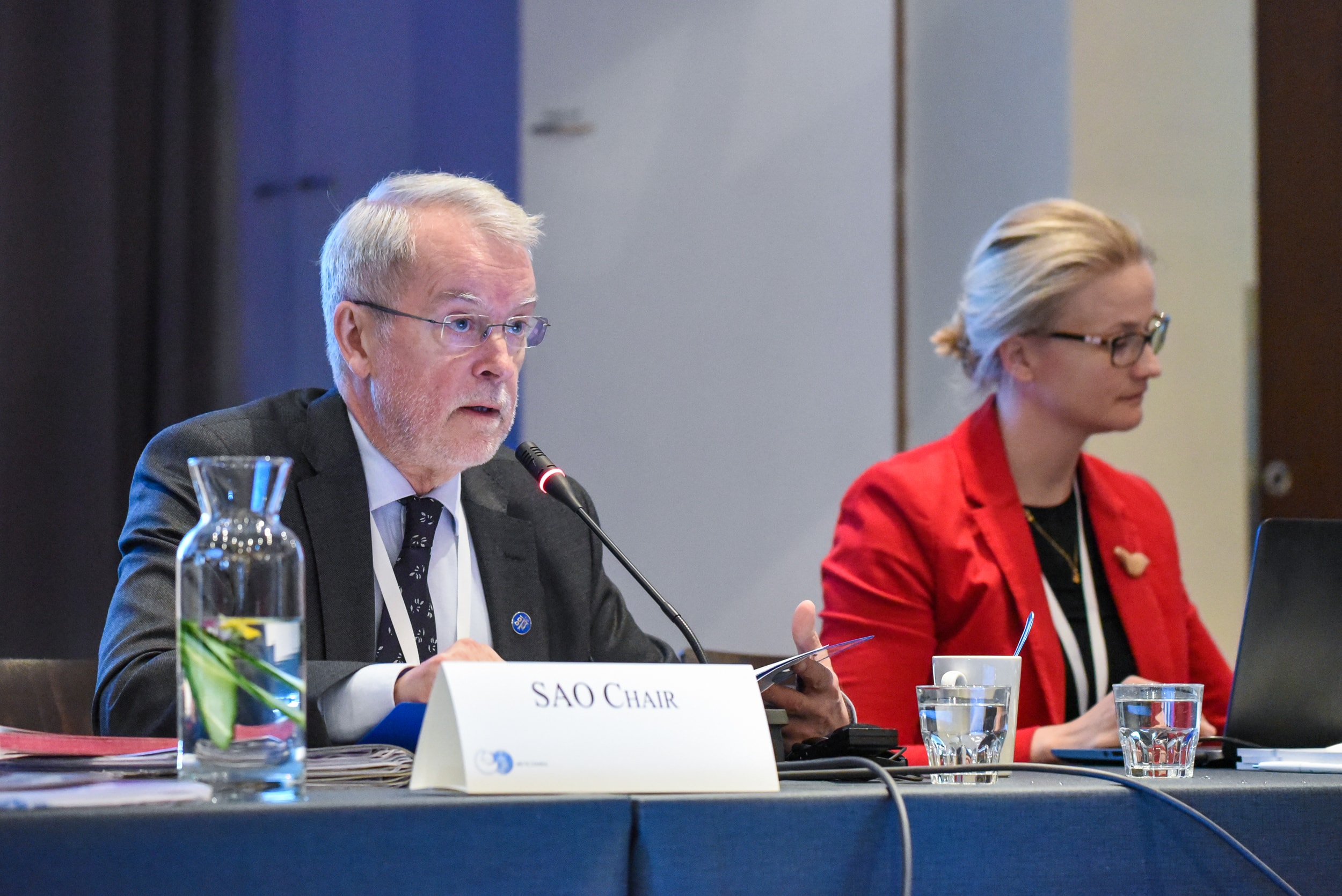 Chair of the Senior Arctic Officials Ambassador Aleksi Härkönen said of the meeting: “It has been enjoyable to chair this first full-scale SAO meeting of our Chairmanship. The contributions from the Arctic States, the indigenous representatives, the Arctic Council Working Groups and the Observers were useful and forward-looking. The City of Oulu provided excellent circumstances for organizing our meeting. I look forward to continued fruitful cooperation with all of our Arctic colleagues, including the new director of the Arctic Council Secretariat”.

The next Senior Arctic Officials’ meeting will take place in Kittilä, Finland in March 2018.