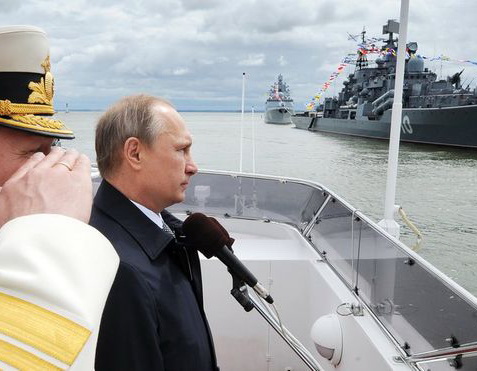 Russia will strengthen its naval forces in the Arctic and Atlantic as a response to Nato activities close to Russia's borders, the Kremlin says. Russia's plans are outlined in a new naval doctrine, launched on Sunday as the nation celebrated Navy Day.

The navy will get a fleet of new icebreakers, because the Arctic region gives Russia unrestricted access to the Atlantic and Pacific, Russian Deputy Prime Minister Dmitry Rogozin said.

The Arctic is also rich in minerals.

The new doctrine calls for close co-operation with China in the Pacific region and India in the Indian Ocean.

At a ceremony by the Baltic Sea, attended by President Vladimir Putin, Mr Rogozin said "the main emphasis is in two directions - the Arctic and Atlantic".

"The Atlantic emphasis is linked to the fact that recently there has been a quite active development of Nato and it has approached our borders. The Russian Federation will of course respond to that."

The ceremony took place at Baltiysk, a major naval base in Kaliningrad, a Russian territory sandwiched between Nato members Poland and Lithuania. 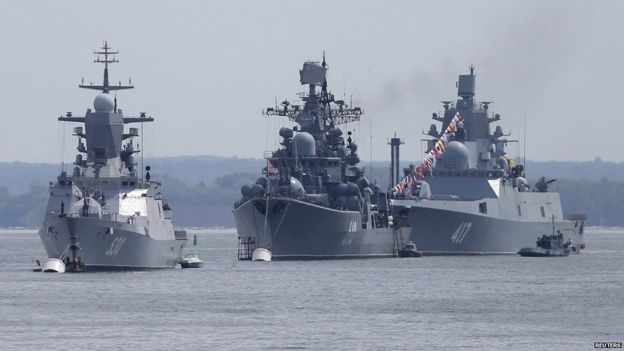 The annexation triggered Western sanctions, which have been ratcheted up several times because of Russian support for armed separatists in eastern Ukraine.

Mr Rogozin said Russia would establish a naval presence in the Mediterranean and invest in the economies of Crimea and Sevastopol. After the collapse of the Soviet Union in 1991 Russia retained control of the big Sevastopol naval base.

A live-fire exercise by the fleet in Sevastopol could have cost lives on Sunday when a missile exploded near the warships, as thousands of spectators watched the display.