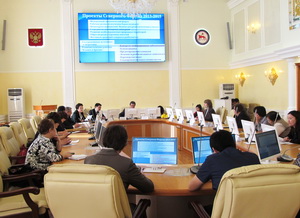 The Secretariat has gathered all project participants and coordinators located in Sakha for a regular Project Coordinators meeting. This event is held to maintain information exchange and renew project statuses held under the auspices of the Northern Forum. More than 30 people attended the meeting, which took place on April 7, 2015.

RCC Chair Vladimir Vasiliev and NF Acting Executive Director Mikhail Pogodaev welcomed the participants and outlines key issues of project activities within the Northern Forum and its current condition. Their welcome was followed by a report of Deputy Executive Director Anastasia Bozhedonova on project implementation – Ms. Bozhedonova has given detailed information about all running NF and NF-related projects and all project propositions.

Because many working groups within the Northern Forum have participants from Sakha, project representation was fairly strong.

Maria Vinokurova spoke on Infectious Diseases Monitoring project – in 2014, CMO of “Phtisiatry” Science Medical Centre Alexander Kravchenko and his deputy Ms. Vinokurova has launched a subproject working group that works under the auspices of the project itself; since then, this working group keeps working on prevention of Tuberculosis infection.

Mr. Nikolaev’s report was followed by his colleague from ambustial dept. of Republican Hospital No.2 – Svetlana Semenova. She spoke on details of application of telemedicine equipment in her hospital that started in 2009 in response to sharp rise of youth death rate in remote Sakha communities (burns and freezing)

Nyurguyana Matveeva has delivered a report on implementation of Substance Abuse Treatment and Prevention project – recently the working group has visited 13 Alaskan centers on treatment of dangerous dependencies. Also, this project touches the suicide problem, which is a major problem and is not less important than drug abuse and alcoholism. 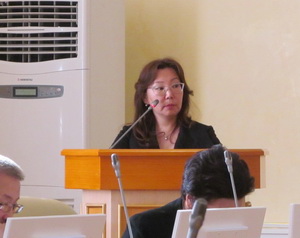 Sargylana Ignatieva, a Rector of Arctic State Institute of Arts and Culture has updated information on International Arctic Art & Culture Centre project – which is ready for presentation to state authorities later in 2015 for approval of further implementation.

Albina Trubina, a Strategic Research Centre Dept. Head, has updated information on another Sakha project – Man in the Arctic, which has been registered with the Arctic Council SDWG Working group on the last (2014) meeting. This project is similar to Human Development Report, but is focused on realities of the Northern communities in Sakha and Russia in general. Criteria of well-being in the North by this project will serve legislators and decision-makers in the region. Currently, the criteria have been determined and approved for further work.

Yana Ivanova, a Director of Sosnovyi Bor Health & Recreation centre has presented the project of International Arctic School that is to be built on premises of the Centre. This school will prepare students for further education in Arctic-related subjects. Since its inception in 2013, the project went from presentation at the NF General Assembly to approval of a building design in 2015. The Project is implemented as primarily international  project, therefore Ms. Ivanova mentioned that this project would benefit from promotion at the Arctic Council.

Another Sosnovyi Bor employee at the meeting was Tuyaara Novgorodova, an educator at the Centre. She has read a report of the NF project Youth Eco Forum that was held at the premises of Sosnoviy Bor in 2014. Detailed report is available at the NF website. 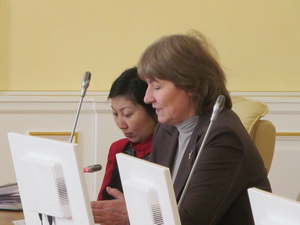 Tatiana Fomicheva – a Head of Ecological Education Dept. at Sakha nature protection ministry, has given insight on an international project led by the Ministry – Nature and Us. Being somewhat similar to NF-supported initiative of Khanty-Mansiyskiy AO “Save and Protect”, it runs throughtout several months and engages youth to eco-minded activities nationwide (complex project).

Oksana Novgorodova, a Business partner from Arigote JV has spoken on rural development, pointing out imperfection of average state support to communities and a list of general problems. Among her arguments was a fact that farming is seriously underpowered despite the conditions for it, and it should be developed. Arigote JV is ready to work with the farming communities and like to support new initiatives on rural development.

Galina Skryabina, an ex-Business Partner and Head of PAKO – Association of credit societies in Yakutsk has presented her organization and shown ways how credit societies may be used for work.

Mikhail Prisyazhny, a pro-Rector of the North-Eastern Federal University (NEFU) has continued presentations with his report on international activities of the University that works actively with many NF-associated regions, such as Hokkaido, Quebec, Alaska, Tromso (Norway) etc. The University also runs an international magazine.

Elena Totonova, a Tutor from the NEFU International Studies Dept. has presented a research on tourism opportunities available in Sakha Republic with detailed information on population and nature conditions.

Next came representatives from the Young Leaders of the Arctic – a youth NGO that is actively raising awareness of Sakha youth of the Arctic affairs and is bringing them together to represent their communities and promote issues of the Arctic. Margarita Krivoshapkina presented current activities of the organization and her colleague Sardaana Semenova has spoken on a new project – Owners of the Arctic, dedicated to creating a positive image of reindeer herding-related jobs through competition; therefore promoting this industry to the young people.

Finally, Julian Barashkov has presented a NF Business partner – Tirekh Agricultural Cooperative, where he works as an Executive. The Cooperative has joined the NF in 2013 at the General Assembly. Its main industry was focused on making products out of collected natural berries, but now it is expanding toward grown berries and developing local-produced foods using modern certified technologies.

This project meeting was to some extent a preparation to the General Assembly, where participants will have to present their reports to regional coordinators and therefore have target-oriented results.