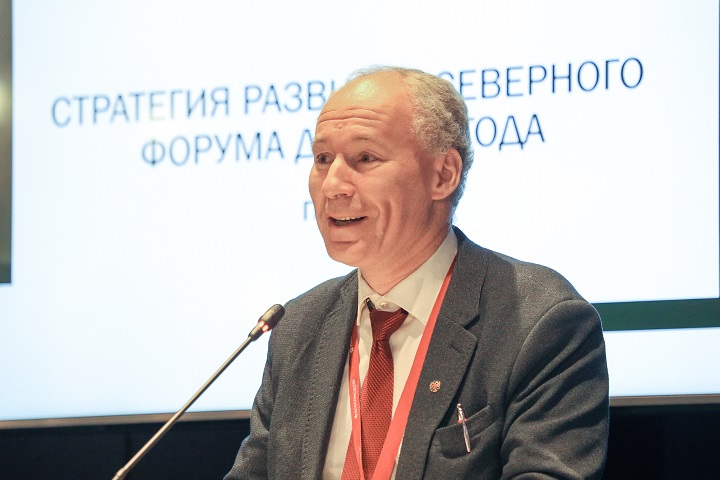 “We have approved the Lapland project and have treated it with care. I would emphasize three ideas that are the cornerstone of this document: traditions as the backbone <…>, reasonable ambition <…> and becoming a ‘smart organization”.

The Youth Eco Forum (YEF) was created to support comprehensive and balanced environmental education in order to realize the creative and leadership potential of Northern Youth. YEF is fostering a generation of youth that is proactive in addressing environmental issues, it is enhancing international relations through shared experiences in unique northern settings, and provides the tools for youth to make a difference in their home region.

Since 2001, the YEF has been organized on a regular basis by the international organization of the northern regions "The Northern Forum" (Executive Director Mikhail Pogodaev), on places provided by the member regions of the Northern Forum. This year the YEF was organized in Rovaniemi, Lapland, Finland, with the full support of the Government of Lapland, represented by the Governor Mika Riipi, and the University of Lapland. Youth Ecological Forums have been held almost every year for more than 10 years. The first Forum was held in 2001 in Edmonton (Canada), and brought together 20 students from 7 countries and regions. Over the years, the Forum was hosted by such cities as Sapporo (Japan), Akureyri (Iceland), Khanty-Mansiysk (Russia), Anchorage (USA), Whitehorse (Canada), Yakutsk (Russia).

During the Youth Eco Forum – 2018 participants presented reports on Northern biodiversity, prepared poster presentations, visited the Arktikum Science Center, listened to lectures by leading international experts in the field of biodiversity conservation, and adopted the Lapland Declaration – 2018. The Governor of Lapland Mika Riipi congratulated the participants of the Youth Eco-Forum - 2018 at the plenary session on October 8, 2018. On October 9-10 YEF participants, as observers, were involved in the events of the International Youth Eco-Summit and the International Congress on the Conservation of Arctic Biodiversity.

I Degree Diploma awarded to Ekaterina Arkhipova, student of the Labytnangi gymnasium of Yamal-Nenets Autonomous Okrug for the project “Children's Arctic School” and the project “Technology of construction of eco-houses in the northern regions”;

II Degree Diploma awarded to Anna-Sakhaaia Stepanova and Anatolii Osipov, students of the Berdigestyakh secondary school named after A.Osipov, Sakha Republic (Yakutia), for the project “The influence of the changing climate on the population of polar bears in the north-east of Yakutia”;

III Degree Diploma awarded to Oleg Vastaev, student of the Lyceum №2, Nizhnevartovsk, Khanty-Mansiysk Autonomous Okrug, for the project “There is a place for plastic”.